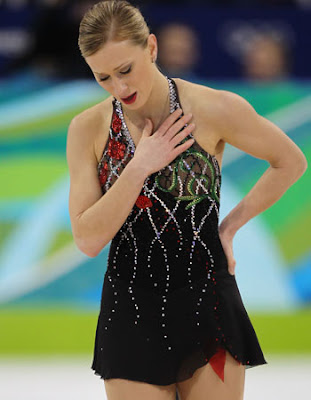 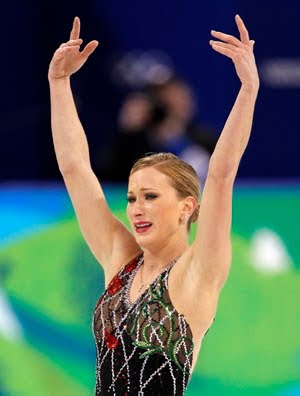 Yesterday, Joannie Rochette went on to perform in the Winter Olympics, winning the bronze medal in ice skating. She performed, in spite of losing her mom unexpectedly just two days before. What a sad tragedy, my heart goes out to Joannie and her family. Her mom was only 55 and died of a heart attack. I write this with tears in my eyes, because I really feel for Joannie, as it's hard to lose your mom, at any age... But, her mom was so young and it's a great sadness.

Below is part of the article, from the Canadian Press.

Joannie Rochette was given the news by her father Normand and her coach Manon Perron at the Olympic Village Sunday morning around 6 a.m.

Officials said Rochette intends to compete at the Olympics, despite the shock of her mother's death. The short program for women's figure skating begins Tuesday night at Pacific Coliseum. The free skate, after which medals are awarded, is scheduled for Thursday. Rochette, 24, will skate 26th of 30 skaters Tuesday night.

At about 1:15 p.m. local time Sunday Rochette stepped out on the ice for a practice, appeared to wipe a tear away, and then went out, sometimes with a serene smile on her face. Her father was in the audience, and he sobbed as Rochette came out on ice. He watched her practice surrounded by friends.

"It has actually just happened this morning," Lambert told reporters. "It's very emotional for me, and all of us, today."

Lambert asked members of the media to respect the privacy of Canada's Olympian athletes as they struggle with the emotional impact Rochette's loss.

"The best way to support them is not to ask them questions," said Lambert.

If Rochette changes her mind and decides not to take part in the Olympics, that will be respected "and we will help her in every way we can."

The Vancouver Organizing Committee for the Winter Olympics expressed its condolences to Rochette and her family at the start of its daily news conference and saluted "her courage and strength" for deciding to continue to compete later this week." More info click HERE

**Pictures taken from the internet.

Posted by islandgirl4ever2 at 6:38 AM

I was very sad when I heard this too. It's not only heartbreaking but hard to believe.
Her courage and grace are what impressed me the most along with her wonderful father, coach and friends all trying to stay strong as a unit.
LIfe is so unpredictable.
Love you, BB

Thanks so much for your heartfelt comment! I can only imagine how hard that was for her to skate with all that sadness in her heart.... But, also doing it FOR her mom, too.
It's a very sad story, my heart is weeping for her and her family...

That is just so sad,tears in my eyes. Things like this make you remember that life is so precious.